On the 24th of October 2019 LaTUCS had it's semester 2 concert Stella Chorum, showcasing the music they had been learning for the past 14 weeks. The choir was 22 voices strong and performed to an audience of over 100 people, positively our biggest concert yet!
~~~ 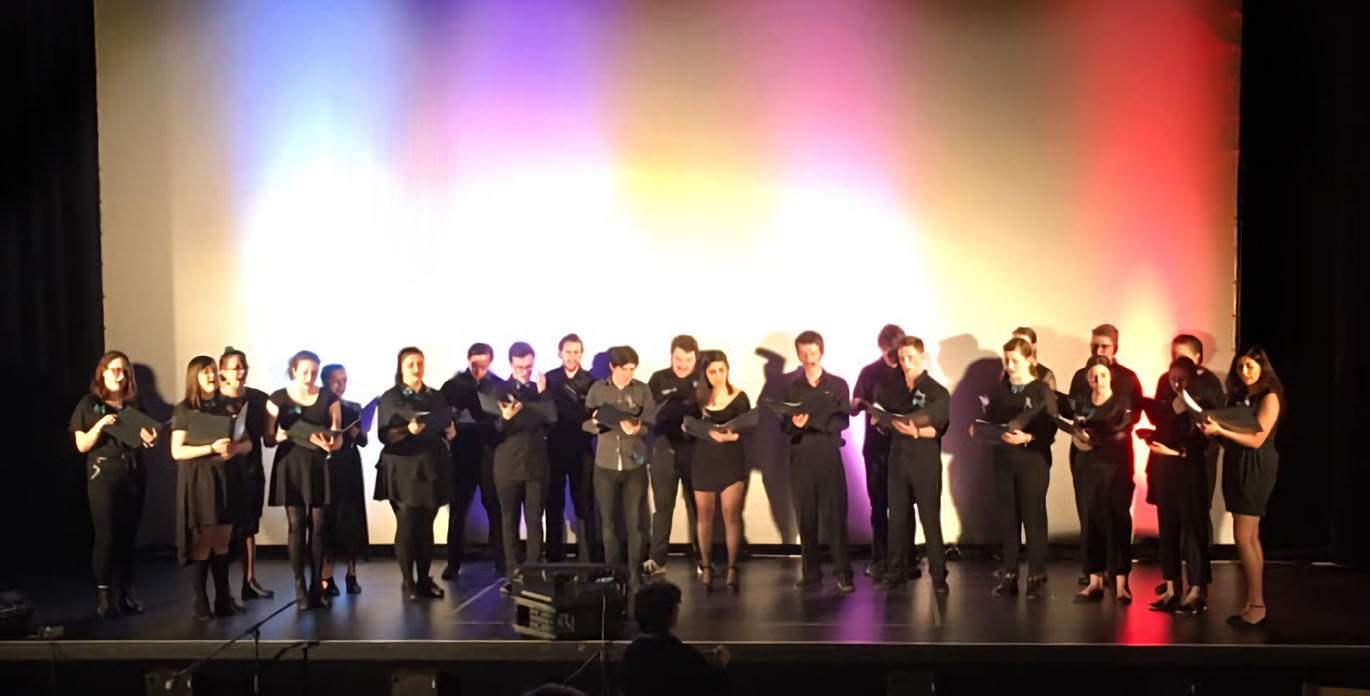 Songs performed by the choir included:

Bread and Roses
Counting Stars
Starman
Power of Love
La Beaute du Veritable
This is Gospel
Northern lights
The Four Chord Song
and, of course,
Laudate
~~~
The night was also peppered throughout with soloist performances, including Anna Bratchford singing Your Song by Elton John, Riley Sutherland on the ukulele performing The Judge by Twenty One Pilots, Primevera, a piano piece performed by Emily Axford, Jessica Adams performing Heaven's not too far away by We Three, Cameron Phillips performing Close your Eyes by Michael Buble, and Dear Mr President by Pink performed by LaTUCS's own acompanist Madison Lemaire accompanied by The Latrube University Society of Music's president Adam Siedel.
~~~

~~~
Below is the review of the event written by AICSA's very own Wizard, David Greagg:

It has been a year since I heard LaTUCS perform. It was easy to see that their improvement was likely to be rapid and sustained. Last night’s concert did not disappoint. Now, as then, the ensemble is a choir under construction; yet in twelve months they have progressed wonderfully. It really does take time to learn to tune your voice to others.

The program was well chosen: mostly monophonic, with antiphonal bits, and a great many solo pieces to break up the ensemble works. I wouldn’t wish to single anyone out, since all the soloists had splendid voices; but the girl with the ukulele did stand out. Existential angst set to a boppy, cheerful ukulele melody was a quintessential highlight. And the piano work was a delight, occasionally dotted with largely baseless performance anxiety. An audience of a hundred-odd was a good roll-up, and they clapped and cheered at every opportunity.

But it was evident even last year that LaTUCS boasts wonderful young voices, notably some dark, smoky contraltos. They have also grown a true, resonant bass line. (One gathers there has been a defection from the tenors.) The soprani were everything you would expect from a group of talented teenagers. Was the concert flawless? Of course not. But if it’s bloodless perfection you’re after, then stay home and raid the Deutsche Grammophon back catalogue instead.

The ensemble works were a mixture of pop culture (Bowie’s Starman) and contemporary compositions. As before, there was one testing piece: Ola Gjeilo’s Northern Lights. It is simpler than the bulk of modern Scandinavian works, being largely based on B flat major chords; but on the other hand, there really is nowhere to hide either. And there are perilous transitions and complex chords hidden in the piece. These were well-managed; and the pure Arctic twilight was well reflected by ardent, youthful voices. (Probably only a Norwegian would bring such austere writing to the Song Of Songs.) Both passion and purity are required for this piece, and both were given. And please, choir: your apprehension about your Latin pronunciation was baseless. Yes, those are the correct sounds and you sang them beautifully.

The rousing finale was an excellent harmonization of something called The Four Chord Song. I hadn’t heard it before, but I looked it up on You-Tube under Axis of Awesome. The four chords in question are the basis of far too many songs (tonic, relative minor, dominant and subdominant) and as a result you can mash up almost anything so long as it's in common time. And they did. I noted Forever Young, Barbie Girl, No Woman No Cry and many others. Everything in fact except Waltzing Matilda, and eventually we got that too. Bravo!

~~~
We thank all the people involved with making the concert a success, including our sound and lighting manager Jarman (Who is a fantastic Tenor), our accompanist Madison Lemaire, our Conductor Lorraine Manifold, and of course all of the members of the choir who participated in weekly rehearsals and a few Sunday Rehearsals throughout the semester.
But most of all, We thank the audience for attending and helping us make your night special!